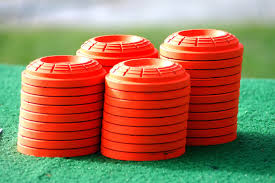 Any kind of shotgun may be used for trap.  Round clay targets, about 5 inches in diameter are launched from an electric launcher.  They are released at the shooter’s command.  Firing positions are at 16 yards behind the front of the trap house.  The clays fly at random angles away from the shooter, but always in the same upward arc and move at between 60 and 70 MPH.  This simulates many game birds flushing from cover, and is excellent practice for small game season.  There is a nominal fee to cover the cost of targets.  Novices will see a noticeable improvement in their hit ratio.

Trap Shooting is open on Wednesdays at noon, and Saturdays at 9AM.

During warmer weather, it will be open on Fridays starting at 4PM (watch the club calendar for this).